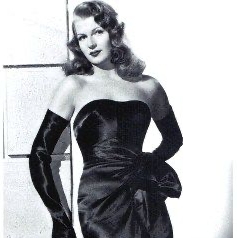 Rita Hayworth was born Margarita Carmen Cansino on October 17, 1918, in Brooklyn, New York, into a family of dancers. Her father, Eduardo Cansino Reina, was a dancer as was his father before him. He emigrated from Spain in 1913. Rita’s American mother, Volga Margaret (Hayworth), who was of mostly Irish descent, met Eduardo in 1916 and were married the following year. Rita, herself, studied as a dancer in order to follow in her family’s footsteps. She joined her family on stage when she was eight years old when her family was filmed in a movie called La Fiesta (1926). It was her first film appearance, albeit an uncredited one. Sotted by Fox studio head Winfield R. Sheehan, she signed her first studio contract, and make her film debut at age sixteen, in Dante’s Inferno (1935), followed by Cruz Diablo (1934). She continued to play small bit parts in several films under the name of “Rita Cansino”. She was Fox dropped her after five small roles, but expert, exploitative promotion by her first husband Edward Judson soon brought Rita a new contract at Columbia Pictures, where studio head Harry Cohn changed her surname to Hayworth and approved raising her hairline by electrolysis. She played the second female lead, Judy McPherson, in Only Angels Have Wings (1939). After thirteen minor roles, Columbia lent her to Warner Bros. for her first big success, The Strawberry Blonde (1941); her splendid dancing with Fred Astaire in You’ll Never Get Rich (1941) made her a star. This was the film that exuded the warmth and seductive vitality that was to make her famous. Her natural, raw beauty was showcased later that year in Blood and Sand (1941), filmed in Technicolor.

Rita was probably the second most popular actress after Betty Grable. In You’ll Never Get Rich (1941) with Fred Astaire, was probably the film that moviegoers felt close to Rita. Her dancing, for which she had studied all her life, was astounding. After the hit Gilda (1946) (her dancing had made the film and it had made her), her career was on the skids. Although she was still making movies, they never approached her earlier success. The drought began between The Lady from Shanghai (1947) and Champagne Safari (1954). Then after Salome (1953), she was not seen again until Pal Joey (1957). Part of the reasons for the downward spiral was television, but also Rita had been replaced by a new star at Columbia, Kim Novak.