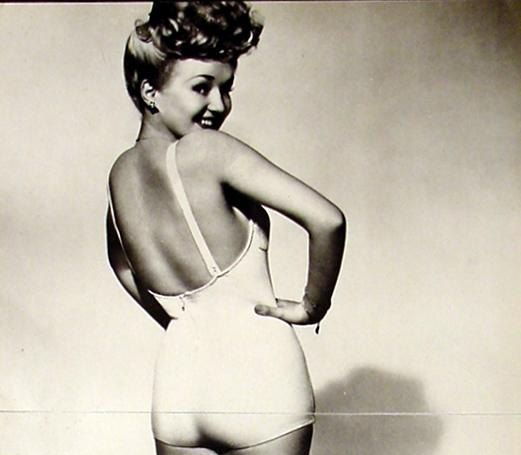 Betty Grable was well known for her beauty and was widely popular in the 1940’s as a pin-up girl. Although she was not the first pin-up girl (that was Dorothy Lamour), Grable’s popularity soon overtook Lamour’s, especially with her famous 1943 image (the image of her in a bathing suit looking back over her shoulder, in the center-right of the collage below).

Grable was born in 1916 in St. Louis, Missouri. Her mother strongly encouraged her to start dancing and get into vaudeville at an early age. In 1929, Grable and her mother moved to Hollywood where Grable soon became involved in multiple movies, rising to official stardom in 1939. She eventually became the No. 1 female box office attraction in 1942, 1943, 1944 and remained in the Top 10 for the next decade.
“In 1942…‘World War II was raging around the globe and escapist films were being manufactured in Hollywood as quickly as possible. Betty’s ingratiating freshness and beauty appealed strongly to the American G.I.s stationed overseas and her films were eagerly requested by the lonely servicemen. Although she never toured outside the United States for the U.S.O., Betty actively participated in War efforts, appearing at Camps across the country and at Bond Rallys where she auctioned off her nylons for thousands of dollars. Volunteering at the Hollywood Canteen, a club for servicemen staffed entirely by film stars and studio workers, she ‘Jitterbugged’ the night away with hundreds of soldiers, sailors and marines….’ Her fan mail often reached 10,000 letters per week, and in 1942 she sent 54,000 autographed photos to the soldiers at Camp Robinson, Arkansas, who had sent her 54,000 letters. She…married the bandleader Harry James [on] July 5, 1943. A popular GI slogan during the war became ‘I want a girl just like the girl that married Harry James’”.